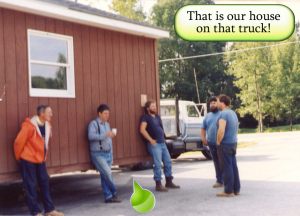 My sisters and I can pack an entire house in one day. We’ve done it!
But if you have a bit more time, these tips can save your sanity.
This is a bit unorganized, but it’s not a check list, it’s a list of suggestions to keep in your head for when you need them.

Put clothing, bedding, favorite toys in the first section. But keep it in boxes so when it’s time to go, you just close up the box and go – wash when you get to the new place.

The second section is stuff you’ll be bringing with you as you move. If you’re only moving across town this section won’t be very big, but if you are moving several states away, think about how you are going to transport the stuff you’ll need as you move. Try to limit 1 backpack of toys per child. Don’t forget to put the pack-n-play in that section or any portable baby swings YOU can’t live without.
Measure the back of your minivan and tape an area the same size on the floor. Once that section is full, that’s it, you can’t bring anything else “as you move”.

By having the staging area, you won’t feel like you have to leave parts of a room until the last minute. As you pack a room, leave the boxes in there and move the mattresses into one room. Just the mattresses, bedding and sleeping toy, that way you don’t have a second staging area.

As you pack a box – mark what it is. “Video tapes of wedding“ “pictures from living room”
Marking a box “Kids” isn’t going to help you the day before you leave when you realize that your husband packed every diaper or the favorite blankie in one of 45 boxes marked ‘Kids‘.

Take one room at a time and pack as fast as you can, tossing stuff you don’t need as you go.
This is not the time to save that cute outfit for your sister’s son. If she isn’t there helping you move, donate the outfit to someone who can use it now.
You don’t need every scrap of paper your child brought home from school. Make a small pile of the really good stuff, get rid of the rest.
The antique avocado clock that your aunt gave you as a wedding present that you’ve been holding on to as to ‘not hurt her feelings‘ this is your chance to get rid of the thing by saying it was broken in the move!

The last time we moved my Mother in Law she had this huge armoire – fragile glass front. Stuff something like that with the pillows and bedding than wrap it in your thickest comforter and then an old sheet set and then duct tape the entire thing. The pillows and blankets on the inside will push outward against the glass. The comforter will push inward protecting the glass, the old sheets protect the comforter from the duct tape. The duct tape holds it all together. We got that thing off an island, to the mainland, in and out of storage and up a flight of stairs in one piece!

I can safely promise that you have a friend like me, someone who wants to help, but has a child with a disability so they are limited in what they can actually do for you – That person would love to take care of your kids at her house while you pack. Believe me! All you need to do is ask.

If people stop in to say good bye, lead them into the room you are working in and talk while you pack. They’ll either pitch in or leave quickly either way you’re still packing.

Go to bed early and get up early. If you’re up late you’re not going to feel like packing the next day.

Don’t let your kids help. Unless you have responsible teenagers, do it yourself!
Don’t let any man near any area that is important. Example: Bathrooms, kitchen, children’s rooms, any area with glass – they don’t get it and you won’t get it there if you allow them to pack.

Lists: Make lists, notes, and keep it handy.
1 Legal pad should do it, keep it with you at all times. You’re going to wake up in a cold sweat in the middle of the night and think “Don‘t forget the utilities” write it down so you can go back to sleep.

Your husband Can’t Read Your Mind! No matter what he touches it’s going to piss you off. He wants to help, but as soon as he moves something he’s in your way or disrupting your flow. Make him a check list of stuff to do. He’ll be out of your hair and he’ll be happy that he’s participating.

Even if the only job you need from him is “Watch the Kids” tell him that, he’ll do it! And say it like this: “Hun, it‘s all planned out in my head. The best thing you can do to help is keep the kids under control, fed, exercised and out of my hair. If you can do that for me, it will mean more than packing any box.”
If he needs suggestions say “The play ground, Mc Donald’s for lunch, a visit to your mothers, then bring home dinner around 6.” That gives him a plan and tells him how long he needs to be gone.
Some guys need explicit instructions. “Take the girls to their room, in their draws you’ll find pink shirts and jean shorts, put those on them. There is clean underwear in the top draw, make sure you change their panties. Feed daughter one X and daughter two Y. Don’t forget their shoes and socks – if you get stuck please don’t guess, just yell to me.”
There are other guys, like my husband, that can wing it well enough that both kids survive and if he fudges up to badly he can calm the girls himself.

If your kid has a special diet I don’t have to tell you about bring food, but don’t forget to put the freezer in that area that you taped off earlier, the one that’s the size of the back of your minivan. Yeah, that’s got to go there also.

Zip locks! Before you even start, pickup every size package of zip lock bags. From the sandwich size to the 2 gallon size. You won’t believe what you can pack in these things.

If it’s going to take you 4 days to get from point A to point B, layout 5 days worth of clothing. 5 pairs of underwear, 5 shirts, 5 shorts, 5 socks, you get the idea, then roll up each days worth of clothing and stick it into a zip lock. Then put those 5 zip locks into a larger zip lock marked with the persons name! Then pack them in a suitcase. If you have an infant – Pack More!

And lastly – Original White Crest Tooth Paste. You’ve been wondering the entire article haven’t you? Have you ever tried to move a mattress from a room with low ceilings? Without fail I have dinged a gash in every bedroom ceiling when moving out. Original Crest hardens like plaster and it’s the same color as most ceilings. Just dab a little up there, take a piece of paper and put it over the area with the tooth paste and smooth it out, then slide the paper off the area, by morning it’s plaster.