All the Ways the Flu Shot is Going to Kill You! 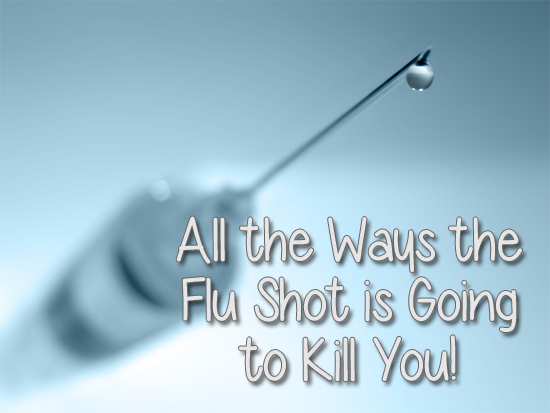 Now I think about it that title may be a little dramatic. Maybe I should have gone with “Many of the Ways the Flu Shot is Going to Kill You!” I’m sure there are many ways that we haven’t figure out yet. Either way there sure are a lot of ways the flu shot can make you sick.

This is the second part of a paper by Amanda. Unhappy with her employers Mandatory Flu Vaccine Policy she set out to research just how healthy the flu shot was, only to find out that the flu shot can make you sick, cause disease and even kill you.

Research Regarding Flu Vaccination and a Mandatory Policy for Healthcare Workers: In December 2011 I was welcomed into the Hospital Administration Office and enveloped in a world of discussions regarding Legal and Compliance issues within the healthcare sector. It is a world in which we want people to do the right thing but, since that is sometimes a matter of opinion, we want people to at least know why they’re doing what they’re doing. Aside from the frustration and complexity of ever changing rules, regulations and expectations in healthcare, what has captured my attention most is how easy it is for entire departments and/or companies to engage in behavior that goes against personal, organizational and/or even legal ethics. In an article from the Oxford Journal entitled “Review of corruption in the health sector: theory, methods and interventions,” I read:

“Behavioral scientists and anthropologists also point to individual and social characteristics which influence the behavior of government agents and clients. This article presents a comprehensive framework and a set of methodologies for describing and measuring how opportunities, pressures and rationalizations influence corruption in the health sector.” and, “In addition to the institutional or organizational factors….behavioral scientists have studied the ways in which individual beliefs, attitudes and social norms influence corruption.” (1)

I reflected on the reason/s why people are willing to engage in corruptive behavior. The reason could be as simple as one or as complex as any combination of the following pressures:

Since all three of these (power, peer pressure and fear) were a factor in my almost decision to stay quiet and get the shot, my red flags shot up. I, not only changed my mind about agreeing to the vaccination, but also decided to take a closer look at flu vaccination in general and at the ethics of a mandatory policy in particular.

It turns out, flu vaccines and mandatory policies are a hot topic! I broached the subject at work and quickly learned that people I admire and love working with would, in fact, harass, stereotype and ridicule me. This is even before I donned the mask. It is embarrassing but I made a choice not to take it personally. I also learned, however, that other employees, both medical and administrative, in various departments are facing similar stresses and are afraid to talk openly about it. I learned that some employees who receive their shot every year are concerned about the new policy. I learned that ingredients within the vaccines themselves are under-tested. I learned that package inserts for FluMist and Fluarix indicate risk for anaphylaxis, allergic asthma, redness and discomfort at the injection site, Guillain-Barré Syndrome (GBS), vasculitis, body aches, paresthesia, neuropathy, seizure, facial palsy, facial paresis, Stevens – Johnson syndrome, headache, sore throat, muscle aches, cough, chills, fever, encephalitis and meningitis.  I learned there is evidence that GBS is underreported and that there are several reasons for this (2). I learned that a close friend of my family was diagnosed with a sudden case of GBS and died from this disease. Until I needed to have this conversation, I did not realize that this was his diagnosis. My respect for privacy prevented me from asking too many questions. Until I needed to have this conversation, nobody in his or my family realized that a flu vaccination could have caused it. I learned that one ingredient in vaccines, Thimersol, has been shown to potentially increase the risk of Alzheimer’s disease, brain damage and nervous system injury. I learned that Polysorbate 80, also known as Tween 80, is an ingredient in GlaxoSmithKline’s Fluarix swine flu vaccine. The effects of Tween 80 have been studied in Slovakia.

“A study done in Slovakia on female rats found that when newborn rats were injected with the substance within a week of birth, they developed damage to the vagina and uterine lining, hormonal changes, ovarian deformities and infertility.”  In addition, “The package insert for Fluarix mentions that the manufacturer cannot guarantee your fertility will be unharmed. Further, if your fertility is compromised, recently passed laws protecting vaccine makers will prevent you from holding GlaxoSmithKline responsible.”  (3)

I found the letter from an RN who wrote to her hospital administration in order to try and save her job and defend her decision to refuse vaccination. In it she stated that, based on risks, the lack of evidence and the warning signs of exaggerated efficacy, even in clinical trial review summaries, she believes that mandatory influenza vaccination is:

“an experimental procedure and in direct violation of the Nuremberg Code which states in article 1 that consent should be voluntary and allow for ‘free power of choice without the intervention of any element of force, fraud, deceit, duress, over-reaching, or other ulterior form of constraint or coercion.’ Article 6 states ‘the degree of risk to be taken should never exceed that determined by the humanitarian importance of the problem to be solved by the experiment.’ And article 9, ‘During the course of the experiment the human subject should be at liberty to bring the experiment to an end if he has reached the physical or mental state where continuation of the experiment seems to him to be impossible.’” (4)

I learned that, based on evidence from a Cochrane Collaboration study published online June 22, 2013 involving healthcare workers and a vulnerable patient population there is

“no evidence to mandate compulsory vaccination of healthcare workers” (5)

I have decided not to vaccinate for the flu this year.  When I first expressed this as a possibility, I was made aware that there may be some push back from Leadership.  So is it to Leadership then that I will admit, I have a serious interest in protecting my healthcare decisions and an even more serious concern about the implementation of this policy. I would like to challenge Leadership to ask themselves whether or not appropriate time was taken to look at the risks and benefits and, based on the evidence, to make a solid scientific and ethical decision regarding this policy. It is important to note the following verbatim warning issued by a Cochrane Collaboration Review pointing out evidence that studies which do encourage vaccination  are published in the more prestigious journals, while those less favorable to the vaccine are not. The warning indicates “evidence of widespread manipulation of conclusions” and a need for additional, reliable research.

“WARNING:
This review includes 15 out of 36 trials funded by industry (four had no funding declaration). An earlier systematic review of 274 influenza vaccine studies published up to 2007 found industry funded studies were published in more prestigious journals and cited more than other studies independently from methodological quality and size. Studies funded from public sources were significantly less likely to report conclusions favorable to the vaccines. The review showed that reliable evidence on influenza vaccines is thin but there is evidence of widespread manipulation of conclusions and spurious notoriety of the studies. The content and conclusions of this review should be interpreted in light of this finding.” (10)

The healthcare sector is at risk for corruption. It is my job to be aware of this. A situation of power, pressure and fear is the perfect opportunity for corruption to thrive. Is this the environment we want to cultivate? Should any healthcare decision be based on power, peer pressure, fear of embarrassment or fear of losing your job? Collectively, does our hospital really feel comfortable asking employees to operate and make healthcare decisions under these conditions? Based on the studies, are we even confident that this type of mandate is effective? Based on the science, are we even confident that the flu vaccination is outside the realm of experimental procedures? I would not be doing my job if, under these conditions, I decided to turn the other way or just shut up and get the injection. Meanwhile, some of my fellow colleagues and (perhaps even more quietly) some of those in leadership, continue to feel powerless and without a voice.
Thank you.

3. Mercola, Joseph, DO – What is In the Flu Vaccine that Can Cause Infertility October 15, 2010
http://www.vaccinationcouncil.org/2010/10/15/what-is-in-the-flu-vaccine-that-can-cause-infertility/

4. Kelly the Kitchen Kop, Healthcare Workers: How to Refuse Mandatory Vaccines and Not Get Fired, February, 28, 2012
http://kellythekitchenkop.com/2012/02/healthcare-workers-how-to-refuse-mandatory-vaccines-and-not-get-fired.html

Elements used to create Featured image Artwork provided by Created by Jill.
CategoryLife & Other Myths
TagsFlu Shot is Going to Kill You