When we chose our pool we had no idea that the ladder that came with the pool was unsafe. We trusted that Intex would only send a product that was safe for everyone to use.

It wasn’t until after the pool was up and we had been using the ladder for a short time that we realize how dangerous the ladder is. 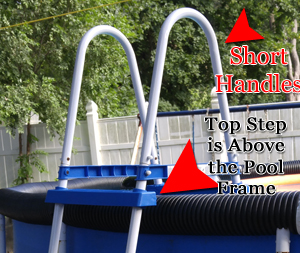 1. The rungs on the ladder go up to the height of the pool, the handles however are very low. Once a person reaches the top of the ladder it is nearly impossible to turn around because for an average height person the handles are below their knees. This forces most people to go down the ladder facing forward and causing them to slip from the rungs.

This is HUGE!!
2. There is No Warning on either the ladder or the pool that discourages standing on the frame of the pool when entering and exiting.
Without thinking children and adults typically stand on the pool frame while entering and exiting because there is no platform to stop them. This is very dangerous because the pool frame and the swimmer are typically wet and they slip off the frame through the middle of the ladder and become trapped between the ladder and the pool.

After I pointed out to Intex that their non-platform ladder does not come with a Warning not to step on the frame, Intex blocked me from messaging them from their FaceBook page.
I don’t think they understand that I have copies and screen captures of their email – They know about the issue and have done nothing to correct the problem. 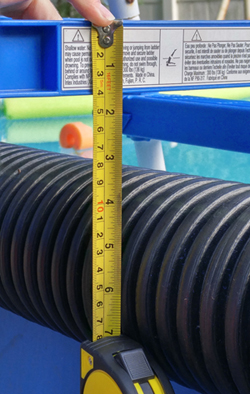 3. The ladder does not connect to the pool in anyway. With the platform ladder that wasn’t an issue because it was easy to balance ones self on the platform when turning around to go in the pool (or out of). However since the handles are around a persons knees as they are attempting to turn around on the ladder and there is no platform to help balance. We have found that it is Typically SAFER to Jump from the ladder than to attempt to climb down the ladder.

When I sent a link to Intex of my daughter falling through the middle of the non-platform ladder I was told a person Shouldn’t Stand on the Ladder. Seriously? If you don’t stand on the ladder you can’t use it.

As you can see in the video, jumping or no jumping, my daughter fell through the middle of the ladder because there is no platform – just a big hole! And even after my daughter was able to right herself she couldn’t keep her balance and was forced to jump from the ladder or fall from it.

If there had been a Platform and Not a BIG HOLE my daughter wouldn’t have fallen through the ladder!

What Intex doesn’t seem to get is that if my 2 year old nephew had climbed that ladder and had fallen through the middle of it, he could have strangled before anyone could have gotten to him.

This isn’t the first time Intex has released a ladder that was unsafe. Intex has recalled unsafe ladders before, but ONLY AFTER 120 people had been injured.

In my opinion Intex needs to either supply a platform for the current ladder or conduct a RECALL of all Non-platform Intex Ladders to be replaced by platformed ladders. 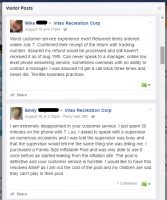 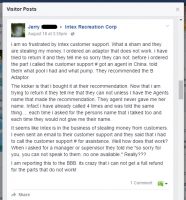 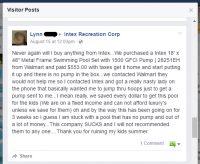 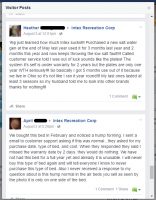