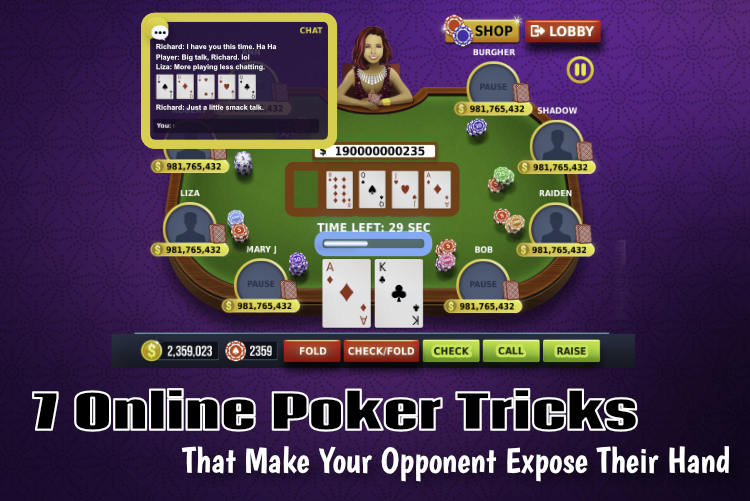 7 Online Poker Tricks That Make Your Opponent Expose Their Hand

Online poker is, relatively speaking, still a new innovation, especially when considering the game’s introduction in 1829. Despite the huge popularity surrounding the game, the online version hasn’t caught up with all poker fans…

The lack of human interaction is responsible for many of the old school poker players finding the online game particularly difficult variation with only the on-screen behavior can be used to expose opposing players’ hands.

In the physical game, players will attempt to read each other, not just the cards, considering body language and conversation alongside betting habits to make a judgment on the hands each player possesses.

Compare this to the online game and you’ll see that all players have to make their judgments is the betting patterns, making the game somewhat more challenging, at least for those effective in in-person tells.

However, exposing a hand and making the correct prediction as to the cards in the hand on an online opponent isn’t impossible and by using the following 7 online poker tricks (or tells) – you can have the very best chance of exposing any player’s hand.

Likewise, if the check isn’t instant, but is incredibly quick, it could signal a weak hand from an impatient player who’s ready to get onto the next hand.

Alternately, players can check instantly if they’ve got a good hand to play with an effort to reverse-tell. If you’ve already made the judgment as to the skill level of the player you’re up against, you might be able to expose the hand of the opponent.

We might even see the instant checks and pattern recognition form the basis of artificial intelligence poker systems.

2. Players check-raising the minimum
Hand strength: either a strong hand or a bluff

If you’re noticing players check-raising the minimum, chances are that the player that you’re up against either has a strong hand or is bluffing their way through the game.

Although rarely played with a medium-strength hand, the tell can be used alongside previous player knowledge to decide whether the hand is either strong or a bluff. If you’ve got a medium-to-strong hand, it can be a good idea to call and see what happens with the player in question.

Adrian Sireca, of OnlineCasinoGems, states “If opponents are check-raising the minimum and checking again on the turn it looks like you’ve exposed a failed bluff.” I couldn’t have said it better myself.

If your opponents are donk betting (leading) the flop, there’s a high chance that the player in question has a weak hand.

To use the donk bet to your advantage, they should be raised to put the weaker hand back into place and forcing the players to fold their weaker hand. This way, you’ll win the pot just as if you had a c-bet. Easy pickings.

It’s hardly a surprise that players ranting, swearing, complaining and insulting are telltale signs of tilt, letting their emotions get the best of them and making silly decisions.

If they’re playing in the room for a long time, they’re sitting ducks and will lose big hand after big hand in an effort to get even (or because of their ego). To use to your advantage, tend to play your strong hands quickly, avoiding slower play.

With tilting players tending to want to be involved in another big pot, it’s best to play the hands that you want in the big pot. It helps if you’re the player that put them on-tilt, to begin with – there’s nothing sweeter than revenge, and nothing better than denying it.

If you’ve caught yourself on tilt, it’s best to move away from the entertainment, adrenaline, and excitement until you’ve cooled off – you’ll be doing yourself a favor (more in-depth discussion here).

It’s rare that a player bluffs with a check-raise on the river unless you’re against some of the tougher pros in the game. It’s best to stay disciplined and avoid being a hero in this situation, knowing that you’ll just be throwing money away otherwise.

If you’re noticing players limp-calling lots of hands, almost taking a passive approach in the game, chances are that you’re up against an inexperienced player that isn’t too clued up on the game.

To use this to your advantage, it’s a good idea to try and isolate them by making larger raises and ultimately playing head to head in the pots. Of course, anything can happen and the tell isn’t always a sure thing, but it’s safe to say that the odds will be in your favor.

If you’re a relatively good player or have a little experience in the game, these players are unlikely to cause you any trouble. We’re expecting to see a lot more of these players, especially with the recent news of the Paddy Power and Poker Stars merger.

Noticing a player taking an excessive amount of time to make their bet – chances are that they’ve either got a very good hand or they’re creating a strong bluff.

With players that take much longer than usual to make a decision and then follow up with a big bet, chances are that they’ve got a strong hand and, unless you’ve got something competitive, you should avoid playing.

If you’re looking to bluff (here’s a guide on how to do it), this is one of the better ways to go about it, using is sparsely against opponents knowing the tell.

10 Best Science Museums You Will Love

6 Gifts You’ll Be Proud Of Giving Away