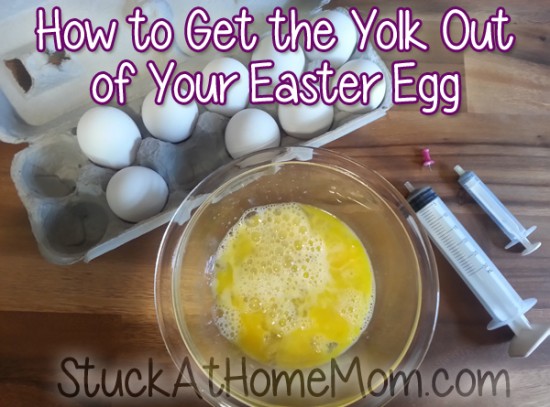 Every Easter growing up we “blew eggs”. My dad would poke a hole on each end and we kids would blow our brains out trying to get that darn yolk out without busting the egg. I didn’t even know that some people hard boiled the eggs until I was an adult!

The great thing about blowing the eggs is that you could leave them out and they didn’t stink! We’d dye eggs and proudly display them all round the house.

The bad part about blowing eggs is that half of them would usually break! All that headache for nothing.

My kids loving showing off the eggs, they don’t love the blowing the yolk out part nearly as much as my sisters and I did. But this year while I was doing the majority of the huffing and puffing I had an idea. What if I made the hole just big enough for one of those children’s medicine syringes?

So I poked and poked, got the hole just big enough and IT WORKED!!

To make sure the eggs were all cleaned out I ran some water into the syringe and shot it into the egg and sucked it back out. Perfect!

Out of 2 dozen eggs I broke 4 blowing the yolk out of them and 0 using the turkey baster.

You need to keep egg and the syringe straight up and shake it now and again to make sure everything gets down to the bottom. The yolky stuff creates the suction so you don’t have to worry about making the hole just perfect.

When I was done I filled the holes with Hot Glue and now we’re ready to dye eggs!