A Rainbow cake isn’t nearly as difficult as it looks

Unless you’re some kind of super cook, make each mix separately, making only 2 cakes at a time.

Mix the first cake mix as directed on the box mix.

Spilt the mix into 2 separate bowls.

Start at the bottom of the Rainbow – stir blue food coloring into one bowl and purple in the other.

Once the mix is the desired color, pour each mix into a separate cake pan and bake according to the directions on the box.

Repeat for the other 4 colors – my husband did this in 2 evenings, my dearest friend did all 6 cakes in one morning.

Once you have all 6 cakes baked start with the purple cake on the bottom and frost.

My husband used a butter frosting (MIL‘s recipe) that worked very well – it’s best to use a firm frosting. 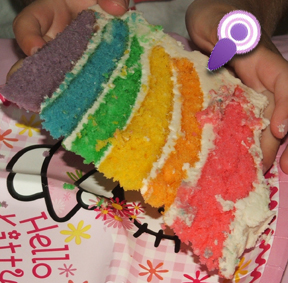 Frost the purple cake – put extra frosting around the edges so when you place the blue cake on top of the purple cake it will sit somewhat flat.
If you don’t build up the ends a bit then the higher layers will crack in two.
As you can see in the slice image, my husband didn’t realize that until he got to the orange layer, he built up the layer of frosting quite a bit before applying the red cake.

I was disappointed my husband used white frosting for the entire cake – I was hoping for each layer to be a separate color, but that would have meant frosting each cake separately then stacking the already frosted cakes – probably not something to try the first time out. Also my husband wanted the Rainbow effect to be a surprise, something people wouldn’t realize or expect.

Keep refrigerated until serving, to firm up the frosting.

And that’s about it! Enjoy.