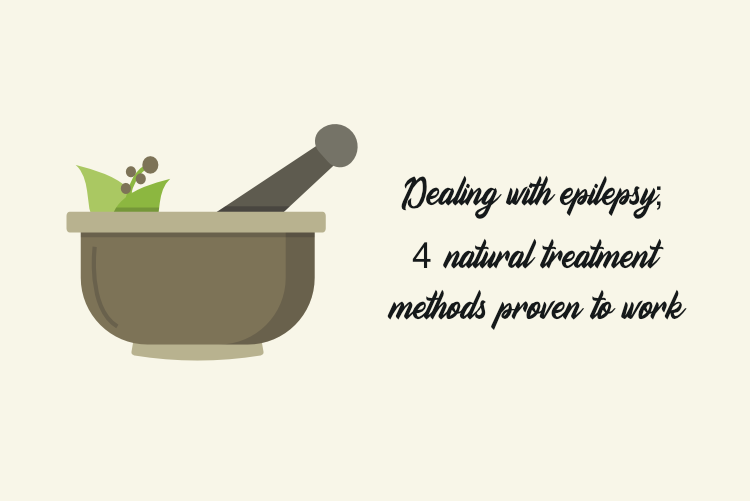 More than 2% of the world’s population suffers from this neurological disorder. Epilepsy can be understood as a central nervous system disorder where the individual’s brain activity becomes excitable, causing symptoms such as seizures. It can cause temporary confusion, stiff muscles, uncontrollable jerking movements, and even loss of awareness and consciousness.

This is typically treated with anti-seizure medication, but this also does not work in some individuals. It is important to know how to manage your seizures so that they are not harmful to you and the people around you. Alternative therapies are gaining quite some momentum in order to help relieve epilepsy symptoms. We have curated a list of the best 4 natural treatment methods that can complement your medications for epilepsy.

Studies show that certain vitamins can help in reducing the number of seizures that are caused by various types of epilepsy. These don’t work alone, but can aid your medications in enhancing their effect. You can take Vitamin B-6 that helps with pyridoxine-dependent seizures. Another important supplement is magnesium. A deficiency of magnesium increases one’s risk for seizures. Vitamin E has the ability to increase antioxidant abilities, thereby decreasing the chances of seizures. You can also take biotin and Vitamin D for this.

Make some changes in your diet

Your diet reflects your body. There are certain changes that you can make to your diet to help decrease seizures. Following a keto diet, that is, a low-carb and high-fat diet can help in this as well. Some children who suffer from epilepsy also find this change to be helpful for their symptoms and the seizures’ frequency. Even Johns Hopkins Medicine made a modified Atkins diet for adults who deal with epilepsy. The studies indicate that this helps lower the frequency of seizures to almost half.

Finally, medical marijuana is being given for dealing with epilepsy. The cannabinoids present in this psychoactive plant help lower the frequency of seizures. You would even be surprised to know that the Food and Drug Administration has approved a drug called Epidolex that contains cannabidiol as its main ingredient and is given for seizures. You can also smoke a joint or a bowl to deal with your symptoms. You can check online for Here’s Weed to view the different options available to you. This is preferred by most who do not want to leave the house to get it. The CBD in marijuana is known to help control the excitability in the brain.

Herbal treatments have quickly become popular due to better awareness and marketing. There are quite a few herbs that can be used for epilepsy such as groundsel, lily of the valley, mugwort, scullcap, valerian, burning bush, hydrocotyle, and many more. A study conducted in 2013 showed how Ayurveda, Kambo, and traditional Chinese medicine showed anticonvulsant effects.

These herbal supplements are not to be used without anti-seizure medication. They are merely meant to complement your treatment. These should also be taken with the doctor’s recommendation since some people might have to deal with side effects such as digestive problems.

It is important to know what forms of alternative therapies are available to you for dealing with epilepsy. Use this to understand these natural treatments and to see if they work for you.

How CBD Proves To Be The Best Boon To Human Health?