The Weekly Money Challenge [easy way to save] 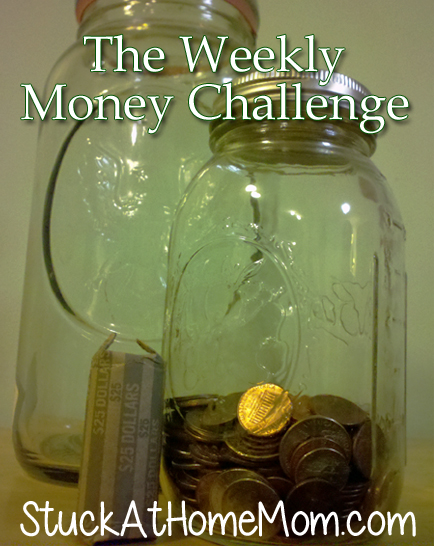 For those of you who feel a little lost in the 52 Week Money Challenge, may I suggest something a little easier.

When we was first married, every night my husband and I would come home and dump our change in a jar – it was a pretty big jar – watching the change inch up the jar gave me an idea.

Each week on pay day I would go to the bank and withdraw a roll of dollar coins – $25 worth. I did it on my lunch break and it only took a minute to run in and grab the coins. Since I did this weekly the tellers knew I was coming and had the roll ready to go.
When I got home that night, I unrolled the coins and dropped them in the jar – they mixed in well with the regular change so my husband never knew. It was a great way to surprise him with a little extra savings.

A week ago or so I was telling my daughter about the “golden dollar jar” and her eyes lit up – so of course we had to start one! We took the change out of the “52 Week Money Challenge” jar and dumped it into one of the smaller mason jars, the next day I picked up a roll of dollar coins and after school it was a big treat putting those coins into the jar – 1 by 1 by 1 by 1 while dinner was cooking.

I don’t have to worry about forgetting to get coins, it’s a Wednesday tradition now – my oldest daughter reminds me in the morning so the coins will be there when she gets home in the after noon.

We have no idea what we’re going to do with the money we’re saving, but I’m sure it’s going to be something fun!