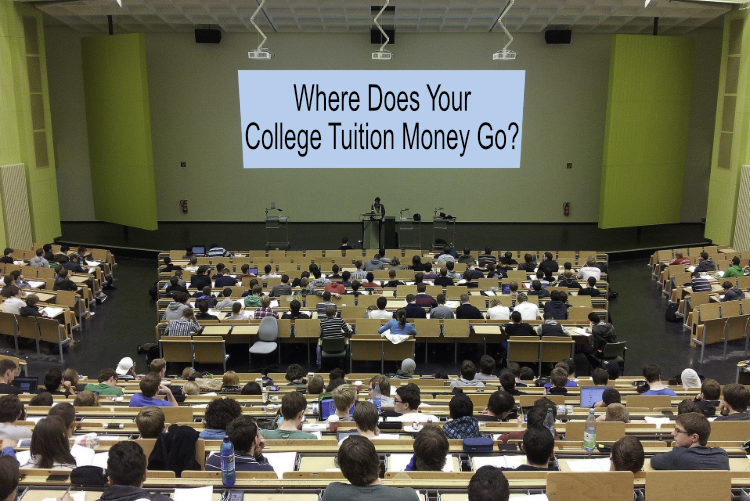 Where Does Your College Tuition Money Go?

A Breakdown of $100 of Tuition

Tuition can be expensive. With that in mind, it makes sense to wonder how the school is going to use your tuition. The best way to understand it is to take the official numbers from the United States Department of Education, which are giant budget numbers, and convert them into smaller numbers that are easier for people to understand.

When you want to understand tuition costs more effectively, you may want to consider how a college uses $100 of your tuition money. This is how a college will split up that money:
$15.81 – Salaries
$15.58 – Hospitals and Healthcare
$11.66 – Research
$11.47 – General Instruction Expenses
$9.61 – Auxiliary Student Enterprises
$8.26 – Academic Support
$8.15 – Institutional Support
$6.25 – Other, Including Taxes and Liabilities
$4.75 – Student Services
$4.52 – Public Services
$3.41 – Grants and Financial Aid
$0.53 – Independent Operations
On average, this works out to $61.46 of the $100 going directly to academic things like salaries and academic support and the remaining $38.54 going to everything else, like research and independent operations, which may include endeavors like federally funded research.

When you’re learning more about college, whether because you’re interested in going or because someone who’s close to you is interested, one thing you’ll probably notice is that tuition costs are very high. According to the College Board, a public school in the 2019-2020 school year will cost $21,950 yearly for tuition, room, board, and fees. However, a private school will cost $49,870.

This is a huge difference in costs — a private school will cost over twice as much per year. Is that cost worth it? It all depends on what you find important, especially considering that in some areas, like public service, public colleges actually spend slightly more.

Tuition As a Percentage of Operating Costs

In 2000, tuition made up only about 29.2% of operating costs for public higher education locations. Fast-forward to 2018, and it’s moved up to 46.6% on average. This also corresponds with a 25% increase in tuition in general.

Tuition is nothing if not a complicated topic. Some people are starting to look into smaller two-year degrees, trade schools are becoming more popular, and there’s even been a push toward free college for certain universities. However, one thing that’s important is that you should know a little bit more about tuition before you start the conversation. With this information, you can talk about tuition more in your day to day life.

4 Items to Pack When Camping