My blogger buddy “Andi Roo” wrote a great post, but there is a bit of bad language in it, so below is the clean version – or you can visit her blog for the real version – but you‘ve been warned: http://www.theworld4realz.com/dont-like-it-get-out/

Here’s an example of why I hate being on Facebook. I just saw this incredibly nice person I happen to know “In Real Life” put up a poster as her status which makes me suddenly want to punch her.

How the heck is this sign in any way Christian — which, unless I’m misunderstanding, is what the sign implies? 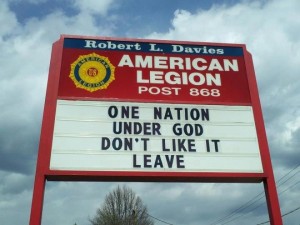 And anyway, I thought we were in the middle of this great anti-bullying movement? This sign feels an awful lot like some mean kids that formed a clique, put themselves in charge of the student lounge, and declared to the rest of the high school,

THIS ROOM
SMOKERS ONLY
DON’T LIKE IT
CHOKE ON SPIT

But I’m not allowed to get into an argument with this lady, because she is a churchy, which automatically allows her room to be a disgustingly horrendous rude witch, and if I even comment something like, “That hurts my feelings, friend!” I will get yelled at by every church on the flipping planet and told about my awesome room which is being held for me in that hot vacation destination known as HELL.

This is the kind of crap I’m talking about. Christians as a whole are granted so much freedom to be nasty and rude. Why? Why do we let them be that way?

I will tell you the answer.

We let them be that way because we are NICE. And we operate under Christian principles better than the Christians do. And we share our toys. And we ensure everybody gets a cookie, even that freak sitting in the corner all alone. Yeah, I see you, buddy. You get toys and cookies, too. No worries. I’m not going to make you leave.

The Christians might. But the rest of us won’t.

Look, who made up that sign, and all those who shared it thereafter — who the heck put you in charge? Maybe you didn’t notice, but you got outvoted, dumb-dumb. We don’t like your bossy God. Anybody who has followers like you passing on the so-called “Good News” either needs a better P.R. agent, or else a new shtick altogether because this message is old and no longer applies. 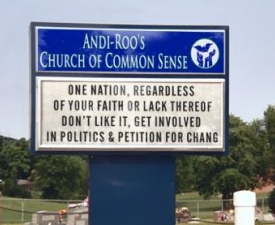 I mean, isn’t that what America is really supposed to be about? Coming together in spite of all our differences? We can’t come together if you’re being a meanie-pants, so cut it out!