The problem with our country is not the Republicans verses Democrats or Blacks verses Whites or the Mexicans, or the Muslims, or the millions of dollars going overseas …….. and if you think it’s the Japanese or the Jews you should have been dead long ago!

The problem with this country is that from a very young age we are all taught to believe that – All Good Things Come from a Fat, Gray Haired, Old, White Man.
Don’t believe me? Who is the republican front runner at this time? 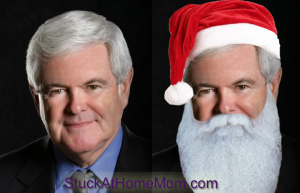 Perspective: Life was pretty good when you were a kid. Sure you had to go to bed when told and you had to eat your peas or no dessert, but when did things start getting bad – when you stopped believing in Santa.

Remember? One day everything was all rosy and white, then the secret was out, you learned the truth and what happened next? Fractions!

You were sitting there at circle time doing your show and tell and the next you’re bringing home Real Homework. Not to long after that you got zits, then all kinds of weird stuff started happening to your body.

Before you say it “Obama got elected”
Yes, he did and if you remember that was after a few VERY bad Christmases.

You see, all the Gray Haired Old Men who were in Washington did things like started wars in the name of peace and gave lots of money mainly to people who weren’t in needed. People started to fear what was to come. We were looking at another Very Bad Christmas and then something happened – FINALLY people started to see the corruption in Santa’s village.
Santa was getting fatter and jollier, while the wee elves were doing all the work. The wee elves revolted and elected a new Santa, one not quite as pale, someone younger and ….. well less corrupt, we’ll say.
There was hope in Santa’s Village once more. BUT the Fat, Gray Haired, Old, White Men, they liked things the way they were and decided until things went back to the status quo there would be No peace in the valley. No more good things.

The wee elves became scared. The New Santa had made promises of a brighter future, but the elves found it easier, and not nearly as scary, to go back to the way things were.
Hope and Change were replaced by Lies and Fear and now Santa’s Village is once again in turmoil. The wee elves had thought that “change” meant Other People would have to change and that would make everything better, but now with the realization that change was coming, the elves panicked and in the confusion the elves elected more Fat, Gray Haired, Old, White Men.

Instead of trusting the New Santa, his hands have been tied, and all the good things that were to come have been stifled. The Fat Old White Men have used their power to do nothing. They hope that doing nothing will reflect poorly on the New Santa and not on themselves.

In less than a year we will see if the elves will blindly follow the Fat, Gray Haired, Old, White Men or if they will once again build up the courage to think for themselves.