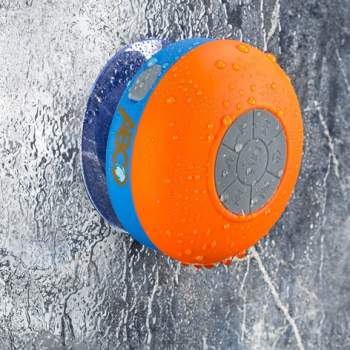 Abco Tech Wireless FM Radio Bluetooth Shower speaker is your solution to listening to music or taking calls while in the shower.

The Abco Tech Wireless FM Radio Bluetooth Shower Speaker is just the product I have wanted to get a hold of. I love listening to music when I’m in the shower and have tried several shower radios in the past but they always leave something to be desired. I’ve tried just turning on my mp3 player and having the sound turned all the way up and it just is not loud enough. I even tried the trick I read about online that said put the mp3 player in a cup and it acts like a speaker. The trick worked but the sound was loud but a little distorted.

I have found the answer to my problem as soon as I open the The Abco Tech Wireless FM Radio Bluetooth Shower speaker. It not only picks up my favorite radio stations better than the other shower radios I have tried but it also pairs directly with my phone, it pairs with the iphone 5 and all android devices, so I can listen to my favorite songs. The suction cup displays it securely and neatly on the wall of the shower.

I was amazed at the quality of sound and the volume that came from this speaker compared to the size of the speaker. The music sounded just as clear as my iPod, and honestly even clearer than most radios I’ve heard. The volume range is great; it can be soft and subtle or loud enough for me to hear downstairs on the opposite end of my house.

The Abco Tech Wireless FM Radio Bluetooth Shower Speaker comes in a variety of colors, like Green, Blue, Pink Zebra, and US Flag. Each one comes with a charger and provides up to 15 hours of run time once charged.

It’s a great speaker and you don’t have to keep it in the bathroom. My oldest has taken to keeping it in her room sticking to her window. Since we don’t have bluetooth in the car we stick the speaker to one of the windows when we want to hear whatever we have preloaded on our mobiles.